You are using an outdated browser. Upgrade your browser today to better experience this site. 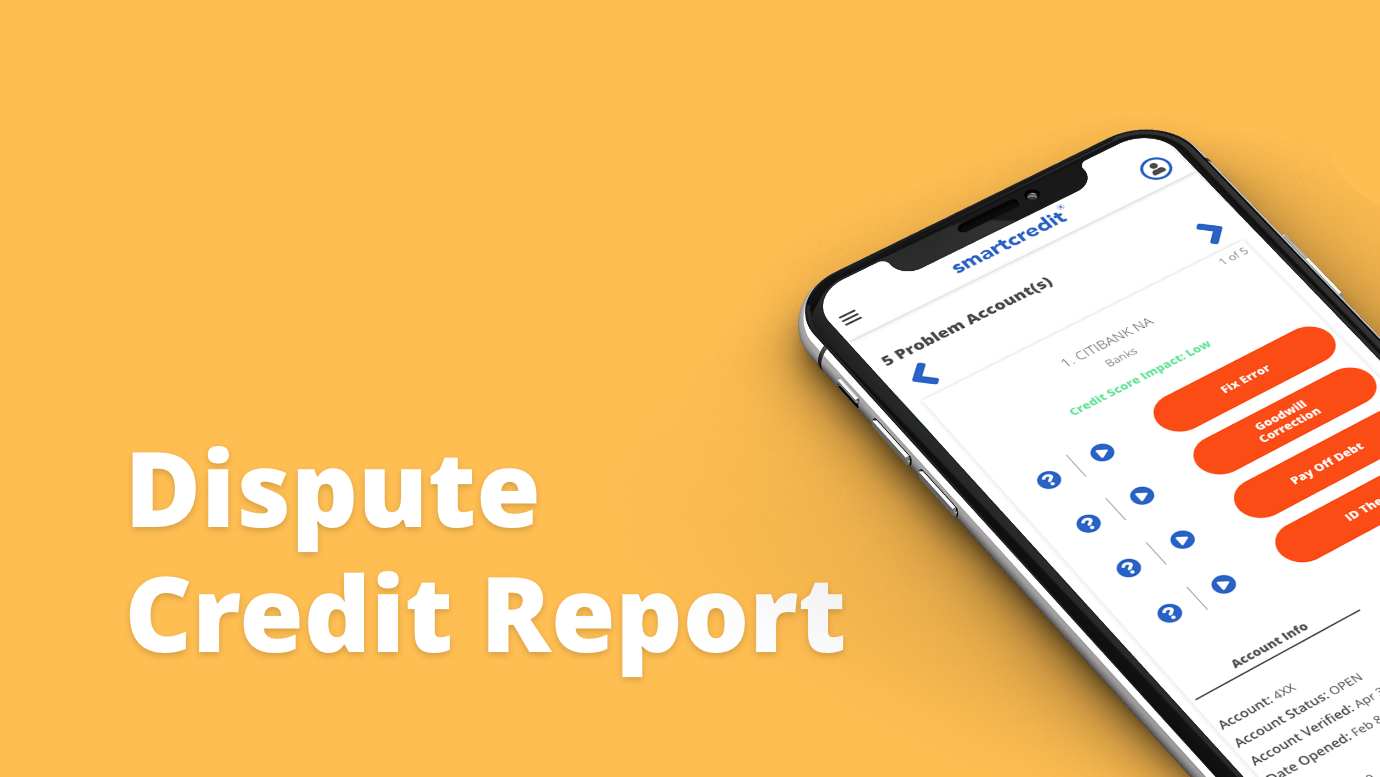 Your credit report is one of the most valuable assets you have when it comes to your financial future. Not only does it contain information such as your address and your credit history, it also includes data that can help you in the process of purchasing a new home or applying for a new line of credit.

However, errors and mistakes on your credit reports can exist at times and will require you to file a credit report dispute with the credit reporting agencies.

While seeing an error on your credit report is the last thing you want to be faced with, the good news is that there are actions you can take to address it. Although disputing the credit report error may seem like a hassle, doing so can prevent your credit score from being negatively affected.

If you've ever found an error on your credit reports, you are far from alone. In fact, credit report errors were the primary consumer complaint received by the Consumer Financial Protection Bureau in 2016.

While some credit report errors may be somewhat harmless to your credit score (misspelled name or address), others can have quite an impact. Over time, these errors can potentially cost you thousands of dollars and become a much bigger problem to deal with.

As a credit reporting agency, each bureau has the responsibility to ensure that consumers receive accurate credit reports and are required to provide consumers with a dispute process in the event that an error occurs.

Under the Fair Credit Reporting Act, when an item on the credit report is disputed, the item must be verified, updated, or removed if it cannot be verified, within 30 days from the date in which the dispute was received.

While that timeframe can be extended under certain circumstances, consumers are provided with a structure in which they can expect credit report disputes to be resolved.

How Do Credit Report Errors Occur?

So, how exactly do credit report errors occur in the first place? Well, they can result from several factors, but there are four in particular that the National Consumer Law Center identified as the most common reasons that they occur.

One of the most common reasons that credit report errors occur is due to consumers' credit files becoming mixed with the credit data of another individual that has the same or similar name.

Another reason that credit report errors occur is when a person becomes the victim of identity theft. In the event that a cybercriminal has stolen your personal information, and they open an account in your name, this causes the account to appear on your credit report, and it can also become challenging to remove.

When it comes to credit reporting, there are three major parties involved: the credit bureau, the consumer, and the data furnisher. A data furnisher refers to the entities that report data to your credit report such as banks, lenders, and debt collectors.

In some cases, a data furnisher might report something inaccurately such as in the payment history or a misspelled name or address.

Some debts have an expiration date when it comes to your credit report.

For example, collection accounts generally "age off" your credit report after seven years from the date in which it first became delinquent. Re-aging occurs when a debt has been sold to a third-party debt collector. At times, this can create confusion with the debt clock, causing your credit score to be negatively affected longer than it should.

How to Spot Errors on Your Credit Report

Before disputing an error on your credit report, it is your responsibility to locate the error. Some consumers complete this process on their own. If you decide to take on the matter yourself, there are a couple of ways in which you can go about finding errors on your credit report.

First, you can request copies of your credit reports from each of the three major credit bureaus (Experian, Equifax, TransUnion) and compare each report to find out if errors exist, and whether those errors appear on all three reports or only one. You can also get a 3-bureau credit report here at SmartCredit®.

If you discover any accounts or late payments that you don't recognize, make accurate notes of each item as you will need to file separate disputes with each credit bureau. Once you have reviewed each credit report, make a precise record of each account, and the reason for any inaccuracies which you will then later provide during the dispute process.

The other way to find credit report errors is by regularly reviewing your credit reports throughout the year. By tracking each report, you will more quickly identify when specific errors are reported - and can subsequently become more proactive in addressing them. This is why having 24/7 credit monitoring from SmartCredit® is such a valuable tool.

What to Look for On Your Credit Report

Additionally, be sure to consider these few things in mind when viewing your credit report.

How to Dispute Items on Your Credit Report

If you see anything on your credit report that is inaccurate, incomplete, or an item that you believe is false, you can file a dispute to address the errors. This process is done by contacting each of the major credit reporting agencies online or by mail and providing them with the information they need to identify your credit report and the specific items in dispute. Copies of any supporting documentation regarding the dispute should also be provided.

As you prepare to file your dispute with the credit reporting agencies, it's vital to clearly identify each error, explain the facts, and provide your reasoning as to why you are disputing the information.

When filing a dispute, the more relevant evidence you can provide the credit bureaus, the stronger your claim may be. In some instances, it can become challenging to determine what sort of evidence is considered helpful or relevant to your dispute. That is of course, unless you are enrolled in SmartCredit® where you can use our Action Buttons to address inaccuracies in your credit report.

However, before moving forward with the dispute process, it's important to remember that the process will take time for the credit reporting agency to review - anywhere from 30 to 45 days, so it's critical to stay patient throughout the entire dispute process.

How to Write an Effective Dispute

If you decide to complete the dispute process on your own, there are a few things to keep in mind in your dispute letter.

First, it's important to be as clear and concise as possible. While you may feel like providing a lengthy explanation regarding the error, a credit bureau's priority is in verifying the accuracy of each item.

When writing your dispute letter, point them exactly to where the inaccuracy is. Identify the item or account in question, account number, the reason you are disputing it, and any additional information that you believe will support your claim.

Last, always include your current address somewhere within the letter. While it may seem like an obvious thing to do, it's easy to forget. If you are filing your dispute online, you will be guided to enter your address during the process, but if you are writing your dispute by mail, it's critical to provide the address that they can send your results to.

What Documents Do I Need to File A Dispute?

When filing a dispute on your credit report, not only do you need to provide a written explanation of the error, but you may need to provide some additional documentation or information.

The documentation or information you may need to provide will depend on the inaccuracy you are disputing as well as the personal information appearing on your credit report. Here are a few examples of what you could be asked to provide to assist with your dispute:

Additionally, you might also be asked to submit supporting documents that will be helpful in resolving any errors, such as:

When filing your credit report dispute, it's recommended that you also contact the company that provided the credit reporting agency with the information regarding your account. These companies, as previously mentioned, are called data furnishers and can be entities such as, but not limited to - banks, credit card issuers, or utility companies.

In some instances, you might be able to resolve the error by contacting the data furnisher directly, which will save you a step in the dispute process.

If your dispute is found to be correct and it was, in fact, an error, all three major credit agencies will be contacted by information providers to correct the data in your credit reports, and you will be provided with a copy of your updated credit report with the changes that were made.

If, however, the investigation did not resolve your dispute, you can file a separate complaint with the Consumer Financial Protection Bureau, and they will provide you with a response within 15 days of receiving your complaint.

If you have not heard from any reporting agency after 30 days, contact the credit bureau, as well as the furnisher, to verify that your credit dispute has been received.

If you find an error or inaccuracy on your credit report, it's critical that you organize all of the required documents to submit your dispute and contact the credit reporting agency as quickly as possible.

Although the process seems extraneous, it is far less complicated than it looks. Being organized, prepared, and professional throughout the process can be helpful in resolving the issues more timely.

Timing in resolving any errors that you find can become a critical factor in the event you are in the middle of a process where your credit is relied on. SmartCredit®'s Action buttons will send your communication to the data furnisher directly - easily and quickly. It's that simple.

Sign up with SmartCredit® today to see what's on your credit report, and the Actions you can take to address any errors.